Located on the beautiful island of Maui, is a community treasure and one of the most widely used wilderness facilities within the County. Resting on the island's cool windward slopes and with a panoramic view of the Pacific Ocean, Camp Maluhia has been a favorite destination for generations of Maui's Scouts. History of Scouting in Maui County The first Scout troop of two patrols in Maui County was organized by the Reverend Father Francis Steffen of the Paia Roman Catholic Church in April of 1911. Scouting grew quickly on Maui and those involved with Scouting recognized a need to organize a Boy Scout Council. On May 27, 1914, a group of men met at the office of Dr. MacLaren in Wailuku to organize the Wailuku Council of the American Boy Scouts to coordinate and manage the Boy Scout program on Maui. Officers for the council were also elected at that meeting. The council was formed with Dr. MacLaren, H. B. Penhallow, Reverend Dodge, Dan T. Carey. Major Bal, W.L. West, W.F. Crockett, R.A. Wadsworth, Dr. William Osmers, and Captain Whitehead as members. The first Council President was C.C. Campbell and the first Council Commissioner was Dr. MacLaren. Application was made to the National Boy Scouts Council for a charter in June 1914.

A charter was officially granted to the Maui County Council in February 1920 to serve the islands of Maui, Molokai, Lanai, and Kahoolawe. William H. “Pop” Hutton was hired that same year to serve as the first Scout Executive of the council.

The records of the council detail many acts of service the Scouting program has provided to the community beginning in World War I. In the first days World War II, Scouts were called upon to patrol Maui’s beaches and keep watch for enemy soldiers. Later they helped to collect materials that were critical to the war effort. Throughout the years Scouts in Maui have done many council service projects benefitting the community. The most recent is the Scouting for Food project that began in 1987. Each November the Scouts distribute bags throughout the community and return the next week to collect the bags that have been filled with food. In 2003 the council collected over 10,000 cans of food for those in need. This food was distributed to seven agencies on Maui and other churches on Molokai and Lanai.

Join Scout leaders from other Maui Units to learn about the latest happenings for the Aloha Council and Maui Nui district. Also, receive Program 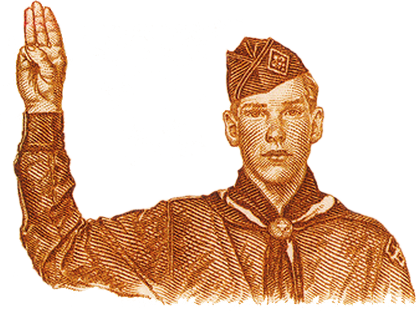